How I reduced my Android build times by 89%

This isn’t a click-bait article! I will explain how to make your Android build time shorter than the reading time of this post (hopefully) 🏃🏻

Android build times are really slow, Ugh. I get it. Especially if you own a low spec machine with 4GB RAM.

TL;DR: Build your Android Project via terminal with gradle assembleDebug

Read on for the longer version describing how I got to this.
Also, make sure to check Bonus section at the end where I reduce the whole build+deployment to device into one command!

My Laptop: MacBook Air early 2014, 4GB Ram and 128 GB SSD.
My laptop does not pack much power, meaning when I would be coding on small-average android projects the build times would take 6–10 minutes.

I recently joined a new company, inherited a big Android code-base and …

My build time when generating a debug APK was 37 minutes. Yes, 37 MINUTES! Let that sink in.

I was able to drop this to 28 minutes by using a couple of tricks (checkout more of those in my Android Tips & Tricks repo) and following the official Gradle performance suggestions such as enabling Build Cache, Parallelize builds, Configure on demand, Offline builds, etc

Updated my gradle config inside ~/.gradle/gradle.properties which now looks like:

At 28 minutes build time, this wasn’t anywhere near acceptable.

After 2 days of trying and failing to reduce the build time, I decided to ditch Android Studio in favor of a text editor to write code. The reasoning behind that was that I wanted to get rid of any bells and whistles Android Studio brings with it. To build/compile code I turned to one of the most common ways of building a project, TERMINAL!

Today has been a bad day😑 @androidstudio has been taking forever to build🧐 On the plus side, I finally decided to ditch #androidstudio & switch to @code and the #terminal to build/compile the project, assemble apk 👨‍💻1⃣1⃣ #yolo #AndroidDev #slow #android #gradle #woes pic.twitter.com/mPWZFz38yd

Guess what, I was able to clock my builds at ~3 minutes via Terminal!

I noticed Android Studio was particularly bad at only the Gradle builds, hence I switched back to writing code in Android Studio but stuck to running builds via my terminal.

At almost 3 minutes build time down from 28 minutes, I had achieved 89% reduction in build times! That’s insane! 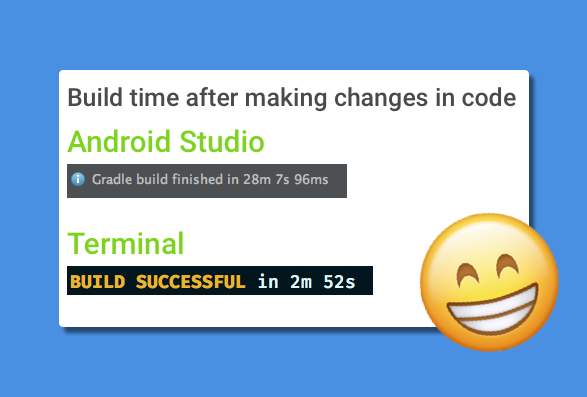 Edit 1: As pointed out by Frank Harper you can effectively build and install the debug apk to your device using just a single command:

This however will not launch the apk but only install it.This is also mentioned here in official documentation.

If you would like to install as well as launch the apk on your connected device, read on…

I have created some terminal aliases to help me install the apk and then launch it too on the connected device.

..the apk is built, pushed and installed to device. Here is the result

I would however like to inspect more about the Gradle build times in my Android Project, but only when time permits. For those who like to know how that is done,

My work cycle is super fast now. I am able to iterate at 10x the speed than I was earlier. I plan on revisiting this with more in-depth info. But for now, this Android Developer with not-so-fast-machine is happy and productive.

EDIT 2: Created a twitter thread with all my terminal aliases for Android Development (at the end there is a link to a gist for easy copy pasting). If you would like to follow, you can do so at*

For people following me, you probably know that I have switched to using the terminal for building, installing and deploying apk for my development work. I am going to start a thread where I list all terminal goodies I use in my day to day #android development work🤓#AndroidDev

Edit 3: As pointed out by Alejandro H. Cruz, in a reddit thread Jake Wharton mentions that it is possible to speed up Android Studio by disabling a lot of plugins. In any case if you feel that you need the functionality they provide, one can just enable them. Most of these plugins aren’t used in day to day development work. I went ahead and disabled a bunch and saw a drastic change in builds run from Android Studio, a drop from 28 minutes to around 5 minutes.* Direct link

I hope this helps someone who is in the same boat as me. Give it a try at least and probably let me know if you find something new in this regards.
If it did help you in any way, then please share this in your network for it to reach people like you and more.

A big thank you to Mario Sanoguera de Lorenzo for proof reading this article.